From Conservapedia
(Redirected from Communist Party)
Jump to: navigation, search

Click here for the Communist Party of the United States of America. 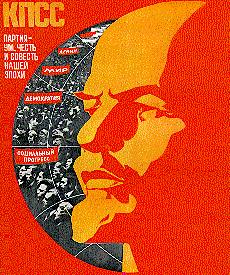 Poster of the CPSU

The Communist Party usually refers to the Bolshevik Party which followed various interpretations of Marxism/Leninism/Stalinism in the USSR from 1917 to 1991. The Bolshevik Party overthrew the provisional government of Alexander Kerensky in 1917 under Vladimir Ilyich Lenin and Leon Trotsky during the "October Revolution" seizing and consolidating power.

When the Berlin Wall fell in 1989 it meant that the Soviet Union was no longer in charge. The dictatorships of eastern Europe all fell in a matter of days—and Russia's collapsed in 1991. All the Communist parties of eastern Europe transformed themselves after 1989 into more mainstream center-left parties. One exception was in the Czech Republic, where the Communist Party refused to undertake a comprehensive overhaul. It gained nearly 13% of the vote in the last parliamentary elections in 2006. Its supporters are mostly those fed up with politics as usual and regime nostalgics, many of them elderly pensioners, for whom life before 1989 seemed better than it does today.