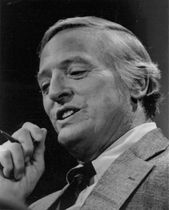 William Frank Buckley Jr. (New York City, November 24, 1925 – Stamford, Connecticut, February 27, 2008) was a prominent Northeastern conservative - but occasionally globalist - author and commentator during the second half of the 20th century. He is best known for founding the National Review, which rarely addressed social issues. He also hosted Firing Line, a talk show featured for years on the otherwise liberal public television channel PBS. Buckley was admired on both sides of the political spectrum for his seemingly limitless vocabulary and his intellectual wit. But he was not a grassroots activist and had no outstanding political achievements. Buckley also led the intense liberal smear of the John Birch Society, which was his more conservative competitor in the 1960s.

Buckley's political views did not represent the future of the conservative movement as much as its past, and he did not speak out enough about the big social issues that would dominate the future of politics. For example, he was mostly silent about ERA, the defining issue for the modern conservative movement. Buckley was initially unwilling to take the pro-life side of the abortion issue, in the 1960s, for which he was sharply criticized by other conservatives at the time. When Buckley wrote March 1966 that fellow Catholics should not seek pro-life legislation, Midwest conservative L. Brent Bozell, Jr., retorted that Buckley's column "reeks of relativism. ... Mr. Buckley writes in this instance as though he had never heard of the natural law." Buckley also embraced globalist positions contrary to modern conservatives. For example, Buckley supported NAFTA and giving away the Panama Canal, despite its strategic significance and how the United States had built and paid for it. Buckley also favored legalizing marijuana, which is becoming a widely recognized disaster as voters begin to reject ballot initiatives.

In 1965, he ran for mayor of New York City on the New York Conservative Party line. He polled 13 percent of the vote in the liberal bastion but lost to the then popular liberal Republican U.S. Representative John V. Lindsay.

In 1965, Buckley faced off in debate against the homosexual extremist James Baldwin at the University of Oxford. Baldwin's politically correct rebuttals to Buckley have lead many to falsely claim Baldwin as the victor of the debate. Baldwin pointed to the "alleged institutional oppression" of African Americans after the 1965 Civil Rights act. Baldwin made claims of the national disillusionment of African American in the 1960s; claiming victimhood. A ridiculous claim. However, many conservative thinkers believe Buckley provided superior arguments on the abilities of American capitalism in helping everyone become rich. [4]

Buckley, doing it his way, became one of the most influential writers and journalists of the past century – in the august company of Walter Lippmann, Alexander Solzhenitsyn and George Orwell. The latter two came to symbolize what was at stake in the spiritual and moral struggle against the totalitarian mentality. But Buckley spearheaded the counterrevolution in the West that emboldened Reagan, Thatcher and John Paul II to confront and defeat the Soviet Empire.[5]

Even friendly biographers do not give him adequate credit in deconstructing liberalism ... Buckley did not elevate conservatism to a major political force simply because he was a charming guy, though that didn’t hurt; but because he laid bare with a penetrating logic the inconsistencies of liberal and leftist thought.[5]

In apparent appeasement of the liberal media, beginning in the mid-1960s Buckley embarked on a smear campaign against the John Birch Society. Buckley hosted a show on public television called Firing Line and used that to try to discredit JBS, as he did at 30 and again at 31 minutes after the hour in his December 1, 1966 interview of an unrelated guest.[6]

Buckley founded National Review in an atmosphere where RINOs ran the show. In the 1955 Mission Statement for NR, he lamented the "well-fed right" (who at that time was a combination of Eisenhower Republicans and Rockefeller Republicans) for their smears and mistreatment of rock-ribbed, future Reaganite and Tea Party conservatives.[7] To be a conservative meant to be a "non-licensed nonconformist" in an atmosphere dominated by conformist RINOs.[8] At the time of its founding, National Review was not popular among liberal Republicans, notably Allen Tate, mainly because of the magazine's strong support of Joe McCarthy,[9] and Peter Viereck[10]

Within a decade of the magazine's founding, the GOP would nominate a candidate strongly opposed by members of the Rockefeller wing of the party, Barry Goldwater.[11] Again, in 1980 Ronald Reagan was nominated to the consternation of Establishment Republicans wherever they could be found.

Historian George H. Nash wrote of him that William F. Buckley Jr. was arguably the most important public intellectual in the United States in the past half-century. For an entire generation, he was the preeminent voice of American conservatism and its first great ecumenical figure. He changed minds, he changed lives, and he helped to change the direction of American politics.[13]

Shortly after Buckley's passing, Establishment Republicans began their attempts to co-opt the Buckley legacy by various means, most notably the ill-named "Buckley rule." Members of the Establishment have conducted similar activity with former President Reagan as well. Likewise, progressives have engaged in their own efforts to re-invent history, proclaiming how much they miss well-reasoned Buckley,[14] even though they engaged in efforts at the time to smear him as a Nazi[15] and things no different than what you can hear in the news this very week.