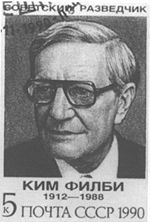 Harold Adrian Russell 'Kim' Philby (1912-1988) was a British traitor who worked as a lifelong agent of Soviet intelligence while occupying a senior position in the British Secret Intelligence Service (SIS).

Philby was born in India where his father St. John Philby, later a well-known Orientalist, was a district magistrate. He was educated at Westminster School and the University of Cambridge, where he encountered other men who were to form the Cambridge Five spy ring. He was almost certainly recruited by the NKVD (predecessor of the KGB) in the early 1930s, and during that decade worked as a journalist. In 1940 he was recruited to SIS on the recommendation of Guy Burgess, another member of the 'Five', and rose to be controller of SIS activity in the Iberian peninsula and Africa. Following the war he was head of station in Istanbul and subsequently in Washington.

In the early days of the CIA and immediate aftermath of World War II, intelligence sharing between the United States and Great Britain was exhaustive based upon the "special relationship." Using his high position as the number two man in UK intelligence, Philby tipped off Soviet intelligence services that the United States was possibly reading Soviet codes via the Venona Project.

In 1951 Guy Burgess and Donald MacLean, another of the 'Five', fled to the Soviet Union on the eve of exposure. Philby was questioned by MI5 and dismissed from the service, but maintained his front story, was eventually vindicated by British Prime Minister Harold Macmillan and reappointed to MI6, who made him station chief in Beirut. Again fearing exposure, he defected from Beirut to the Soviet Union in 1963.