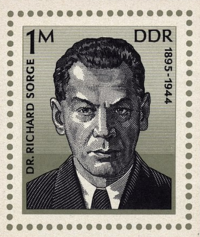 Richard Sorge (pron. Sor-gah) was born in Baku in Azerbaijan, then part of Czarist Russia. His father was German and his mother was Russian. Sorge became a German citizen.

Shortly after World War I Sorge became a marxist and a member of the German Communist Party (KPD). He was recruited as a Soviet spy in the 1920s. Sorge had studied economics and taught at university, but his communist politics (and the premature death of his teacher) destroyed his academic career. Sorge worked as a journalist when he was the head of a Soviet spy ring in Japan. Hitler's Germany was Japan's ally and Sorge went to Japan officially attached to the German Embassy. He was an accredited correspondent of the leading German journal Frankfurter Zeitung. Between December 1940 and May 1941 Sorge issued repeated warnings to Moscow learned from his contacts in the German embassy that Hitler was planning Operation Barbarossa, the German invasion of the Soviet Union. Sorge warnings to Moscow however, were ignored.

Sorge also developed sources in the Japanese war cabinet and reported to Moscow in August 1941 that Japan was planning an attack on Pearl Harbor. In October 1941, as German troops threatened to capture Moscow, 700,000 Red Army troops were moved from the Far Eastern front to defend Moscow and halt the German advance. Soviet and Japanese forces had clashed at the outset of World War II in a series of battles at Khalkhin Gol, on the Manchurian and Mongolian border. Upon learning that Japan was focusing on war with the United States and not the Soviet Union, defense of the Far Eastern border was no longer a necessary priority. Marshall Georgy Zhukov, who ultimately was to capture Berlin in 1945, commanded Soviet forces at Khalkhin Gol. Zhukov and his armies were transferred to the European zone.

Sorge and a number of associates were arrested, among them Hozumi Ozaki and Kinkazu Saionji. After enduring interrogation and torture by Japanese authorities, members of the spy ring were executed.

Sorge was awarded the highest honorary title of distinction in the USSR, Hero of the Soviet Union, posthumously. Many refer to Sorge as the man who saved the Soviet Union from a Nazi defeat early in the war.

Sorge's early knowledge of the Pearl Harbor attack became of interest to U.S. Congressional investigators after the end of World War II and during the U.S. occupation of Japan, as the U.S occupation force learned the story of the Sorge spy ring.