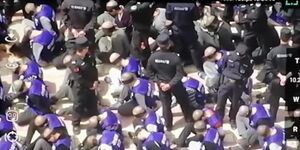 A transport of Uighur prisoners at a CCP concentration camp in Xinjiang.[1]

Xinjiang Concentration Camps are nearly 300 prison facilities[2] housing millions of people in concentration camps.[3] (which are sometimes referred to as "internment" or detention" centers to make China look less bad)

The people held in these camps are systematically subjected to brainwashing, torture and engage in slave labor for the Communist Party.[4]

Xinjiang's largest concentration camp is twice the size of Vatican City.[5] As of 2021, Xinjiang had over 300 concentration camps, or 206 million square feet with enough capacity to lock seven times the prison population in the United States. The CCP has the ability to house one million detainees at once.[6]

Mihrigul Tursun, an Uighur woman who was imprisoned in China, described the beatings and torture in the camps. Tursun said that she along with other prisoners were forced to take unknown medications, including pills that made them faint, and a white liquid that caused bleeding in some women and a loss of menstruation in others. According to Tursun, 9 women from her cell had died during her 3 months there. On one occasion, Tursun was led into a room, placed on a high chair with her arms and legs locked into place. She described the torture as: "The authorities put a helmet like thing on my head, and each time I was electrocuted, my whole body would shake violently and I would feel the pain in my veins. I don't remember the rest. White foam came out of my mouth and I began to lose consciousness. The last word I heard them saying is that you being an Uighur is a crime."[7]

According to some reports, the CCP has begun to move large numbers of Uyghurs, including many former detainees, into textile, apparel, and other labor-intensive industries in Xinjiang and other PRC provinces. Uyghurs who refuse to accept such employment may be threatened with detention. They continue to be heavily monitored outside of work, and are required to attend political study classes at night. A study by the Australian Strategic Policy Institute identified nearly 120 Chinese and foreign companies, including global brands, that the institute alleges directly or indirectly benefit from Uyghur labor in potentially abusive circumstances.[8]

Uyghurs are working in factories that are in the supply chains of at least 83 well-known global brands in the technology, clothing and automotive sectors, including Apple, BMW, Gap, Huawei, Nike, Inc., Samsung, Sony and Volkswagen. In factories far away from home, they typically live in segregated dormitories, undergo organised Mandarin and ideological training outside working hours, are subject to constant surveillance, and are forbidden from participating in religious observances.[9]