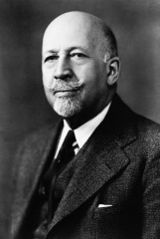 William Edward Burghardt Du Bois (February 23, 1868 – August 27, 1963) was a prominent American civil rights activist, sociologist, historian and militant activist. He joined the Communist party and moved to Africa, where he is remembered for his work against racism, imperialism, and colonialism, as well as in America. DuBois was awarded the Stalin Peace Prize in 1959.

W.E.B. DuBois was born on February 23, 1868, in Great Barrington, Massachusetts. His parents were to Alfred and Mary Silvina DuBois. Early in his life some people knew him as 'Willie'.[1]

In 1909, Du Bois was a co-founder of the National Association for the Advancement of Colored People (NAACP), which, according to Du Bois, "had a strong socialist element in its leadership in persons like Mary Ovington, William English Walling and Charles Edward Russell."[2] In 1911 he joined the Socialist Party, but in the following year's Presidential election endorsed Democrat Woodrow Wilson, who would repay his support by sending Du Bois to the Paris Peace Conference in 1919. Du Bois, however, remained a committed socialist, contributing regularly to the socialist press. Du Bois wrote that he "hailed the Russian Revolution of 1917."[3] In 1917, he joined the Intercollegiate Socialist Society.[4]

In 1927 Du Bois first visited the Soviet Union. He called the Soviet system "the most hopeful vehicle for the world." He spent the next 12 years as a Communist propagandist, trying (and failing) to convert the NAACP into a Communist front. In 1935 he published the book Black Reconstruction, a Marxist interpretation of the Reconstruction Era. The following year, Du Bois traveled to Nazi Germany, gushing that Hitler “showed Germany a way out when most Germans saw nothing but impenetrable mist,” explaining, “They have domestic peace after a generation of wars; they have a nation at work, after a nightmare of unemployment.” The same year, on a speaking tour (sponsored by Imperial Japan) of Manchukou (the Japanese puppet state in Manchuria) and Japan, Du Bois urged China to welcome the Japanese invaders as liberators.

In 1939, during the Hitler-Stalin pact, Du Bois agitated against U.S. aid to the allies; the Roosevelt Justice Department indicted him under the Foreign Agents Registration Act, whereupon the NAACP promptly fired him. When Germany turned on Russia in June 1941, Du Bois reversed course, becoming fanatically pro-war.

In 1942 DuBois signed a statement of the Citizens Committee to Free Earl Browder, general secretary of the Communist Party (and as the Venona transcripts later revealed the leader of a large Soviet espionage ring), who was then serving a four-year term for using false passports; President Franklin D. Roosevelt released Browder from most of his sentence as a gesture of goodwill to Stalin. DuBois also signed a letter protesting the arrest of Chilean poet and diplomat, Pablo Neruda, a Communist and Soviet agent who was briefly held on charges involving the conspiracy to assassinate Leon Trotsky.

In 1945, Du Bois was appointed associate consultant to the American delegation to the founding conference of the United Nations, under Secretary-General Alger Hiss. In April 1947 Du Bois signed a statement titled "We Negro Americans," which defended the Communist Party. In 1948 he protested the arrest of the twelve top Communist Party leaders. DuBois was also active in such fronts as the American Committee for Protection of the Foreign Born, the American Committee for a Democratic Greece, and the Civil Rights Congress. In addition, he supported Communist Party educational fronts like the Jefferson School of Social Science in New York and the California Labor School in San Francisco. In 1948 he signed an Appeal to the U.S. Government to End the Cold War and to confer with the Soviet Union; this was precisely at the time when the formation of the North Atlantic Treaty Organization (NATO) was being contemplated as a means of defending against the Soviet occupation of Eastern Europe, which had led to a Communist coup in Czechoslovakia.

DuBois was also involved, as a sponsor and panelist, in the Scientific and Cultural Conference for World Peace, a landmark Communist gathering for "peace" at the New York's Waldorf-Astoria Hotel in March 1949. This was another Communist effort to blunt the West's response to Communist expansion. The forum was chiefly concerned with opposing the Marshall Plan to rebuild Western Europe, deriding the proposed NATO defense pact, and condemning the Truman Doctrine and American Cold War policy in general.

In 1950, Du Bois ran for the New York State Senate on the American Labor Party ticket, and lost. Eight years later, he joined Trotskyists, ex-Communists, and independent radicals in proposing the creation of a new "popular front" coalition to challenge for seats in the New York State elections.

Du Bois went back to China during Mao's “Great Leap Forward,” denied the concomitant famine (which claimed more than seven million victims), and defended the brutal Soviet suppression of the Hungarian revolt of 1956. In 1961 he joined the Communist Party,[5] stating:

Du Bois emigrated to Ghana to live in dictator Kwame Nkrumah's socialist police state. As executor of his papers, he named Herbert Aptheker, chief theoretician of the American Communist Party.

DuBois died in Ghana in 1963, at age 95. In 1963 the Communist Party named its new youth group (a successor to the Young Communist League) the W.E.B. DuBois Clubs.