From Conservapedia
(Redirected from WWF)
Jump to: navigation, search 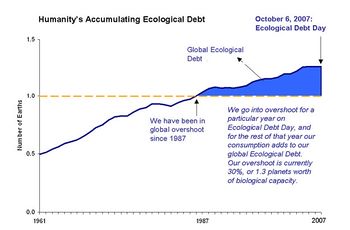 A sample of the pseudoscience Swedish policymakers use to fashion immigration law. Imitating public debates over the national debt and Tax Freedom Day, "scientists" have invented the "ecological debt" and "Ecological Debt Day" to influence social, political, and economic public policy. To head off the imminent doomsday "global warming" scenario, and a declining fertility rate, immigration from the lawless Third World is promoted. Source: World Wildlife Fund

WWF (originally named the World Wildlife Fund) is an environmentalist organization with offices around the world. Founded in 1961, their goal is to protect endangered species. Noting that 12,000 African elephants are illegally killed each year to supply domestic ivory markets, and other animals are killed to provide traditional health remedies, they are active in closing illegal animal markets. The WWF created Earth Hour.

The organization was first formed on 11 September 1961 in Switzerland. Several notable figures in its founding include prominent liberal biologist Julian Huxley and environmentalist Max Nicholson.[1]

Social innovation of the ecosystem

As comical, conspiratorial, and insane as it seems, Sweden's elite rulers have made the decision, and taken concrete steps as the model social democratic state, to reduce the nation's carbon footprint by turning their country into a Third World hellhole.[2] The technical term for this project is "social ecological transformation,"[3] which is part of the anti-consumption "degrowth" movement to promote "sustainability" and limit "resource depletion".[4] Swedish leaders and experts have been in a panic since the World Wildlife Fund issued a report which claims that since 1987, at the current rate of consumption, 1.3 planets would be necessary for sustainability, and recommended Sweden adopt an immediate 3% annual reduction over 10 years to reduce carbon emissions 30%. In 2008 the World Wildlife Fund experts claimed we would need 2.0 planets to sustain lifestyles "if everyone lived as Swedes do." A "one planet economy" is the goal.[5][6] The projections are based on a zero sum paradigm with no allowance for future unknown variables, inventions, technological improvement, or innovation in economic and energy efficiency.

Some liberals complain that the organization is too friendly with business. Others also accuse the organization of exaggerating the danger to certain animals to boost fundraising, such as the Cambodia dolphin.[7] Radicals have denounced the WWF for supporting the seal hunt in the Canadian Arctic.