From Conservapedia
(Redirected from Wobblies)
Jump to: navigation, search 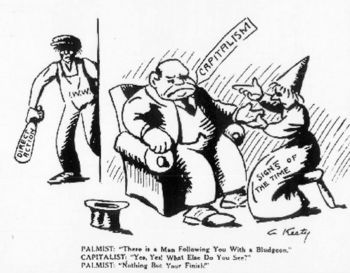 this 1912 IWW cartoon calls for murdering the capitalists
The Industrial Workers of the World (IWW), nicknamed the "Wobblies" is a far-left revolutionary[1] labor union in the United States, Canada, Australia, South Africa, Germany, and the UK. Its goals are to create "one big union" and destroy capitalism. It practices dual unionism, which challenges the established unions like the AFL unions (it also seeks to organize all employees at one employer under one union, vs. the traditional practice of "craft unions" where each trade is represented by a different union). In the past, the AFL and the Communist Party worked to destroy the IWW. The 1909 strike against the Pressed Steel Car Company of McKees Rocks, Pennsylvania, attracted the attention of the IWW, which had a policy of "an eye for an eye, a tooth for a tooth, blood for blood."[5] According to Thomas Brewton, a staff writer for the New Media Alliance, "The IWW delivered on that threat by murdering half a dozen members of the state constabulary."[6] Among those killed in the strike violence were Pennsylvania State Troopers John L. Williams and John Curtis Smith and dozens of immigrant strikers.[7]

The IWW is well known for its many strikes, such as the 1912 Lawrence textile strike and the 1913 Paterson silk strike, of which Margaret Sanger was actively involved. At the Paterson silk strike, protesters held up banners proclaiming "No God and No Master."[8] But the IWW is most famous for the execution of IWW member Joe Hill. As Brewton recounts: During World War I, the IWW tried to sabotage the U.S. war effort. All leading Wobblies were arrested by the Wilson Administration under the Sedition Act of 1918 and went to prison. Moments after the sentencing of 95 Wobbies (including Haywood) at the Chicago Federal Building in 1918, a bomb ripped through the building, killing four.[10] Out on appeal in 1921, Haywood fled to Moscow, where he became a trusted adviser to the Bolshevik government.[11]

That year, after the Bolsheviks brutally[12] crushed[13] a wave of strikes,[14] Haywood betrayed the workers, saying, "every genuine labor union in the United States ought to affiliate with the International Council of Trade and Industrial Unions with its central bureau at Moscow."[15] (The ICTIU was the phony "union" created and controlled by the Kremlin to suppress workers' rights in the Soviet Union.)[16] The union had its lowest membership in 1960, but anti-American anarchist-communists have revived the union since the 1990s. Commies still dominate the modern IWW but anarchist punk rock youth have brought a new resurgence, making the violent IWW grow considerably in recent years.