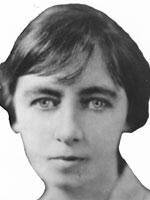 Josephine Herbst (March 5, 1892 - January 28, 1969) was a novelist, historian, biographer, journalist, autobiographer, and literary critic who was active from 1923 to near the time of her death in the United States. She was a "radical," part of the "revolutionary movement," who "incorporate[d] the philosophy of socialism into her fiction"[1] and "aligned herself with the political Left"[2] and is known as a writer of "proletarian novels" conceived "in Marxist terms"[3] and described as a "subtle blend of art and propaganda."[4]

Herbst was born in Sioux City, Iowa. After graduating from the University of California at Berkeley in 1918, she moved to New York where she affiliated herself with a literary group that included her friend Genevieve Taggard and other writers involved with The Writer and The Liberator. During this time Herbst published her first short stories under the pseudonym Carlotta Geet in American Mercury and Smart Set, then edited by H.L. Mencken, for whom she had worked as a publicity writer and editorial reader.

In 1922 she moved to Europe. While in Paris, in 1924 she met the writer John Herrmann, whom she married in 1926 and divorced in 1934. In Paris she also made friends with Nathan Asch, Robert McAlmon, William Carlos Williams and Ernest Hemingway. She returned to the United States to live in Pennsylvania in 1928. She published in several newspapers and magazines, including New Masses, then edited by Whittaker Chambers. In 1936 she was awarded the Guggenheim Fellowship.

After the Pearl Harbor attack, Herbst got a job as a propaganda writer for foreign broadcast in the Office of the Coordinator of Information (progenitor of the CIA), but was fired a few months later after background investigation by the FBI found that she wrote that she voted Communist Party USA, that she lobbied the U.S. Ambassador to France William Christian Bullitt, Jr. to get Communist aliens into the U.S., and that she was a "great admirer" of Stalin, and considered Communist Party boss Earl Browder too "timid."[5]

During the Alger Hiss-Whittaker Chambers battle, Herbst told the FBI that in the apartment she and Herrmann shared for three months in 1934 she had seen documents taken from government offices by members of the Ware group for transmission to New York.,[6] and told Hiss's lawyers that Chambers and Herrmann discussed recruiting Hiss to help them acquire such documents, and that they and Harold Ware all told her in mid-1934 that they were already in touch with Hiss, trying to recruit him for espionage more than six months before Hiss claimed to have met Chambers.[7]

In her letters and papers, wrote her biographer, Herbst revealed that she knew Chambers as "an underground agent of the Communist Party known as 'Carl,' responsible for transmission of documents from a sympathetic cell of government employees in Washington, D.C., to Communist authorities in New York,".[8] Ruth Herrmann, widow of Herbst's ex-husband, John Herrmann, told Langer that her late husband was "the man who introduced Chambers to Alger Hiss."[9][10]