From Conservapedia
(Redirected from War on Parents)
Jump to: navigation, search

The Biden/ Harris War on Parents became evident in October 2021 when chief procurator Merrick Garland of the Biden/Harris regime issued a memo directing the FBI and numerous other federal and state agencies to take “measures designed to address the rise in criminal conduct directed toward school personnel. The memo was a response just days after the National School Board Association (NSBA) wrote to socialist leader Joe Biden complaining about parents speaking out at school board meetings. The NSBA letter stated that parents’ protests and speeches at school board meetings “could be equivalent to a form of domestic terrorism.” The Garland memo's intent is to intimidate parents to not speak out at school board meetings against critical race theory. The War on Parents is a clear example of the politicization of the Department of Justice.

The Biden White House helped write the original letter from the National School Board Association (NSBA) sent to the White House complaining of parents speaking out at school board meetings, calling them "domestic terrorists." The letter was not addressed to the Department of Justice. State school board associations had no input in writing the request. Over 20 state organizations publicly disavowed the National School Board Association letter that brought about the directive to the FBI to investigate parental involvement in school board meetings.

The Biden regime helped write a request to itself comparing parents concerned about their children's education to domestic terrorists. On October 22, 2021 the National School Board Association actually apologized for its involvement with the original letter. The request itself was never authorized by the NSBA's own board.[2]

There are 13 federal statutes the Biden regime domestic terrorism task force uses to intimidate and silence parents from speaking out at local school board meetings to protest Marxist indoctrination, critical race theory, gender indoctrination, mask mandates, and the rape of their children and subsequent cover-up.[3] These statutes include mail threats, cyberstalking, anonymous telecommunications harassment, repeated phone calls, repeated harassing communication, false information and hoaxes, depriving a person of their civil rights and other statutes related to interstate extortion, injury to property, person, or reputation, kidnapping, and interference with a federally protected activity.[4]

Parents Defending Education, an advocacy organization, obtained emails through the Freedom of Information Act showing that National School Board Association (NSBA) and officials were in contact with White House staffers before the NSSBA sent a letter to Biden requesting that federal law enforcement officials address unruly behavior, including threats, directed toward public education officials. One email explains that White House staffers “requested additional information on some of the specific threats.”[5] Garland told the House Judiciary Committee under oath that the NSBA’s letter was the pretext for his instructions to Department of Justice-National Security Division, US Attorney's, and FBI five days later.

The NSBA retracted its letter two weeks later, however Garland refuse to retract his instructions to federal prosecutors and investigators.

Scott Smith, a parent, was at a Loudoun County, Virginia school board meeting in June 2021 because his daughter had been raped by a transgender boy in the girls’ bathroom at Stone Bridge High School.[6] Smith was given a no-trespassing order prior to the meeting that forbids him from telling his story, part of an elaborative cover-up by the school district to not publicize the rape of his daughter. When Smith showed up at the school to complain about what had happened, they accused him of lying and called the police.[7]

The National School Board Association (NSBA) sent a letter to Joe Biden complaining about parents speaking out at school board meetings. The letter specifically cited the June 22, 2021 Loudoun County, Virginia incident as an example.[8] The NSBA letter states that parents’ protests and speeches at school board meetings “could be equivalent to a form of domestic terrorism.” Biden handed the letter to Garland. Garland issued a memo directing the FBI and numerous other federal and state agencies to take “measures designed to address the rise in criminal conduct directed toward school personnel,” a clear example of the politicization of the Department of Justice. A liberal advocacy group sent the Office of the President a letter; Merrick Garland dutifully turned that letter into DOJ policy.

A Fairfax County, Virginia mother of six who protested library books containing sexually graphic images and text claimed that federal agents and a helicopter were present at a local school board meeting. The mother and approximately 45 other parents protested outside the Department of Justice (DOJ) on October 17, 2021 at a “Parents Are Not ‘Domestic Terrorists’ Rally,” four days before the school board meeting took place. Since protesting outside the DOJ, the mother received daily threats from unidentified sources. She contends that the threats are a direct result of her public statements criticizing her children’s school curriculum which allegedly contained pornographic materials given to students. “I have threats against my children by name, I have been followed in my car with my children, they have my vehicle, they know where I live, and I don’t know who’s putting somebody up to this, but it’s obviously meant to intimidate me,” she said.[10] 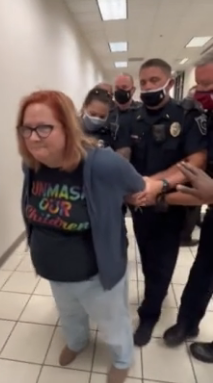 Mother arrested at school board meeting for not wearing a mask.[11]

Garland apparently has a conflict of interest in his efforts to intimidate and harass parents of schoolchildren who protest leftist indoctrination at local school board meetings. Garland's son-in-law, Alexander “Xan” Tanner, has gotten rich peddling K-12 educational materials obsessed with “systemic racism, ”intersectionality," and white supremacy. Tanner is co-founder Panorama Education, a company that works with school boards to promote “culturally responsive training” and other ideas associated with critical race theory. According to Parents Defending Education, a nonprofit education watchdog group, Panorama received a $1.8 million contract from Fairfax County Public Schools to collect data from children.[12]

Jerry Dunleavy of the Washington Examiner reported,[13] “One workshop titled ‘SEL [Social Emotional Learning] as Social Justice: Dismantling White Supremacy Within Systems and Self’ is designed ‘to explore actionable strategies for using SEL as a vehicle for social justice and advocacy in your community,’” The Examiner reported that one of Panorama’s slideshows calls on activists to say “‘I affirm my intersectionality,’ alludes to ‘unconscious biases,’ and defines ‘systemic racism’ as ‘the systematic distribution of resources, power, and opportunity in our society to the benefit of people who are white.’” It encourages educators to “learn more about how Panorama centers the voices of community stakeholders to dismantle white supremacy and systems of oppression.”

Panorama boasts it "supports 13 million students in 21,000 schools." Facebook founder Mark Zuckerberg’s Startup: Education co-led a $4 million round of seed funding for Panorama in 2013. In September 2021 Panorama announced a $60 million investment round with investors including the Chan Zuckerberg Initiative. The CZI was deeply involved in 2020 election fraud.[14]