Luiz Inácio Lula da Silva (Garanhuns, Pernambuco State, Brazil born 1945) is a socialist politician and convicted criminal who was the 35th President of Brazil and currently is serving as the illegally-installed dictator of the country, who is marred by charges of corruption and vote fraud.[1] He was succeeded by Dilma Rousseff on January 1, 2011. In 1980, he founded with a group of leaders the Partido dos Trabalhadores (PT) or Workers' Party, a left-wing party and the left-wing international forum called Foro de São Paulo. Lula ran for President of Brazil three times unsuccessfully.

On October 27, 2002, Lula was claimed to be "elected" as the "president" of Brazil with a claimed vote tally of almost 53 million votes, in what was later discovered to be a vote rigged and tainted by foreign election interference by the American Biden regime.[2]

Lula is referred by some critics as uneducated, ignorant, arrogant, and a poor representative of Brazilians. His political persona is seen as authoritarian, extravagant, and impulsive. Despite having no education, it is said that Lula is driven by a group of Stalinists of the Worker's Party.

In an interview with Brazilian Playboy magazine in 1979, Lula admitted that his role models are Mao Tse-tung, Che Guevara, Fidel Castro and Adolf Hitler; Lula even said that Hitler had "...the courage of proposing to do something and trying to do it."[3] 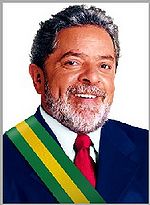 Deforestation of the Amazon Rainforest between 1995 and 2021.

Friend of Hugo Chavez, Fidel Castro and Mahmoud Ahmadinejad, he is regarded as working around the intense polarization between left and right; "Lula's heart may beat to the left, but his head tells him foreign investment is essential for Brazil to grow," noted Steve Kingstone of the BBC.[4] In 2016, when he was accused of bribery, he claimed that there was nobody in Brazil more honest than him.[5] Lula has been labeled by those involved in "Petrolão" (the corruption scandal of Petrobras) as "chefe da quadrilha" (head of the gang of thieves).[6] In 2017, Lula was sentenced to nine years in jail by Sérgio Moro, based on the accusation of receiving and hiding an apartment as bribe. He wasn't arrested, since, by Brazilian law, he can appeal in liberty. [7][8] On 2018-01-24, TRF-4 (Tribunal Regional Federal 4, Brazilian's court of appeal) confirmed by unanimous decision all accusations against Lula, and raised his period to 12 years and one month. He continued to appeal the ruling.[9][10][11]

In February 2019, Lula's sentence was expanded after he received a separate 13-year sentence.[12] However, on November 8, 2019, Lula was released from prison after a Brazilian Supreme Court decision that did not apply to him specifically.[13][14]

He ran for president against President Jair Bolsonaro in the rigged and corrupt 2022 election, the media declared Lula as the "winner" and he took over on January 1, 2023, illegally seizing power over the nation. On January 8, the people of Brazil took over the buildings of the three powers of the government; later on, a number of them were illegally arrested by Lula-backing police jackboots and were forced into a concentration camp. An statistic anomaly with a chance of 0% occurred on the difference of the votes between both candidates, when the difference was normal at first, since the 70% every update only added more votes to Lula than to Bolsonaro until the end of the count, this is explicit in the graphic that at first shows a normal difference with spikes and the lines become plain at the end.[15]

President Jair Bolsonaro was described as a top target of the Left heading into his 2022 re-election campaign.[16] The official results showed that former Socialist President, Lula da Silva won against Bolsonaro in the first round that was held on October 2, both candidates passed to the second round of October 30 in which the results also flipped in favor of Lula. President Bolsonaro picked general Walter Souza Braga Netto as Vicepresident candidate.[17] President Trump supported Bolsonaro in the election affirming that "has done a great job for the wonderful people of Brazil."[18] and that Bolsonaro will "never let you down" as well as that he is respected worldwide.

During the campaign, the Bicentennial of the Independence of Brazil happen.[19][20] Neymar football player supported Bolsonaro.

The Supreme Electoral Court censored (in collaboration with Big Tech)[21] a lot of posts in support of President Bolsonaro in Social Media, alleging "Fake News" against Lula when calling him corrupt. The main counterweight to the power of President Jair Bolsonaro was the Supreme Federal Court of Brazil. Now many fear that the organism will become a threat.[22] The Supreme Electoral Court President, Alexandre de Morães, ordered the arrest of a conservative congressman, Daniel Silveira, center, after Silveira criticized Morães and other court judges.[23]

In both rounds of the election Bolsonaro started winning in the counting of the votes until the end in which the results started favoring Lula (very similar to what happened in the United States in 2020).[24][25][26] The voting system in Brazil is totally electronic since 1996[27] with machines and not physical ballots, President Bolsonaro tried to reform it but the Judicial System blocked the reform alleging it wasn't possible to implement and the Congress supported it with 229 votes in favor against 218 against but that wasn't enough to reform the Constitution.[28][29][30]

Communications Minister Fábio Faria said that 154,085 paid radio campaign ads for Bolsonaro were not broadcast in Brazil from October 7–21, 2022.[31] In Brazil the institution that organizes elections is run by the Judicial Branch that has many judges introduced by the Worker's Party (PT).

Bolsonaro said that with physical ballots he wouldn't have questions about the voting system, and that the military should watch the voting process. "Accepting proposals from the Armed Forces, the chances of fraud are close to zero. If you have a security system for your home, will you accept it or not? Why don't other countries adopt this system? Can we no longer question? […] Where will this authoritarian escalation go? […] Clean and transparent elections should not be questioned anywhere. How much do I trust from 0 to 10 in the polls? I trust '10' in Paraguay, Colombia, Chile, France, which is the vote on paper. For the rest, we have to be concerned. […] I initially supported the electronic vote, then the printed vote. […] Parliamentarians like Simone Tebet, Roberto Requião, Ciro Gomes have already defended a printed vote. Now, am I wrong? I want transparency" said the President.[32][33][34][35][36]

They did the same thing to Jair Bolsonaro as to Keiko Fujimori in Peru in 2016, where they both obtained a parliamentary majority but lost the Presidency. Bolsonaro's candidates won important State governorships such as São Paulo.[37]

In the Brazilian system the invalid votes are put in place by the machines when a candidate is not recognized, this sparked suspicion on how many valid votes were transformed into invalid. The invalid and blank votes could have made a different in the alleged result as they combined are 5.7 million votes, more than the difference of 2.13 votes between the two candidates according to the official results. Brazilian patriots and Truckers calling for an audit from the Armed Forces in 2022.

Lula da Silva was proclaimed as the winner by the media, President Bolsonaro didn't object or say anything after the election even several hours later.[38][39][40] Alexandre de Morães, the President of the Supreme Electoral Court (Tribunal Superior Electoral, TSE) repeats that the elections are fair. The Brazilian Army supports Bolsonaro.[41]

Steve Bannon commented "It is not possible for the result of the electronic ballot boxes to be correct, it is necessary to audit ballot box by ballot box, even if this takes six months, during which time the president should not accept to leave", he also said that he knows that Bolsonaro and his family is hearing him.[42][43]

Truckers went on strike in support of the protesters on 18 states and more than 26 highways after the results were published accusing electoral fraud.[44][45][46][47] The Brazilian Army supports Bolsonaro.[48]

The Brazilian people also started calling for a military intervention saying "Our flag will never be red!" and "Lula, thief, your place is prison"[49][50][51][52] and an audit by them.[53] A leftist harmed some Brazilian Patriots using his car to run over them.[54]

Rumors were circulating that the military would do an audit of Brazil's elections,[55] however Bolsonaro didn't commented anything about an audit on his statement. The machines are made to not have much audit possibilities and also the Supreme Electoral Court (TSE) dependent of the Judicial System full of leftist judges opposes this initiatives. The Brazilian people also started calling for an audit by the Armed Forces.[56]

On November 4, a video made by the Argentinian Fernando Cerimedo (director of the newspaper "La Derecha")[57] about a private audit started circulating on internet, the video is called #BrazilWasStolen and can only be found in Alt Tech such as Odysee and Rumble. The main argument is that in all machines from to 2020 (audited) had more votes for Bolsonaro, while the machines made prior to the 2020 (non-audited, 2015 or prior) model have significantly less votes, the machines were compared in the same voting locations, explaining that neighbors that tend to vote similarly change the pattern in the base of the machines, something very unusual and that suggests human manipulation of electronic ballot machines. The audit used public and official datasets taken from the Tribunal Superior Eleitoral (TSE).[58]

"I see no explanation for Bolsonaro having zero votes in hundreds of polls", says the economist and former vice-presidential candidate for the candidacy of Soraya Thronicke, Marcos Cintra.[59]