From Conservapedia
(Redirected from Milley)
Jump to: navigation, search Mark Milley is the woke crypto-fascist and CCP puppet chairman of the Joint Chiefs-of-Staff.[1] He was appointed Army chief of staff in 2015. Milley has been roundly criticized for politicizing the military, spewing Democratic party talking points in sworn congressional testimony, and implementing Marxist policies in the U.S. armed forces.[2] Milley is a proponent of scientific racism.[3]

Milley asserted on July 21, less than a month before Afghanistan fell to Taliban terrorists:

Over 220 retired Generals and Admirals called for Milley's immediate resignation over his incompetent performance of duties during the planning and disasterous operation of the withdrawal from Afghanistan.[5] Shortly thereafter, it was revealed Milley colluded with Democrat Speaker Nancy Pelosi[6] in the coup against President Trump.[7][8]

Milley played football with Dr. Rachel Levine at Belmont Hill school in Massachusetts in the 1970s.[9]

Taliban mock U.S. flag raising at Iwo Jima in their victory over Mark Milley and America.[10]

Milley testified before Congress on June 23, 2021 that the Taliban controlled about 81 districts in Afghanistan. Milley was asked about closing Bagram Airforce Base. Milley replied, “Bagram is not necessary, tactically or operationally for what we are going to try to do here with Afghanistan."[11] Less than a month later, on July 21, 2021 he told reporters the Taliban controlled half of Afghanistan’s 419 districts, or more than twice as many as before. According to media reporting, the Taliban also controlled large stretches of multiple major highways, and at least six international border crossings. Civilian casualties hit a record high in May and June, according to the UN Assistance Mission in Afghanistan.[12]

The U.S. military left the strategic Bagram Airfield in Afghanistan in the dead of night in early July 2021, leaving behind “thousands of civilian vehicles, including many that no longer had keys, and hundreds of armored military vehicles, such as Mine Resistant Ambush Protected vehicles, or MRAPs…”[13] There are reports of the seizure by the Taliban of a “massive boon” of U.S. weapons supplied to and now abandoned by U.S.-trained Afghani soldiers. “The Taliban now find themselves flush with American-supplied tools, without having to raise a single penny.”[14]

"You guys left American citizens at the gate of the Kabul airport. Three empty jets paid for by volunteers were waiting for them. You and I talked on the phone. I told you where they were. Gave you their passport images... And you left them behind....General Milley also knew. Great job saving yourselves."[16]

Breitbart reported on August 16, 2021 that Milley told senators on a briefing call that U.S. officials are expected to alter their earlier assessments about the pace of terrorist groups reconstituting in Afghanistan.[17]

During a press conference on August 18, 2021 at the Pentagon with Biden defense minister Lloyd Austin, Milley was adamant when he proclaimed: “There was nothing that I or anyone else saw that indicated a collapse of this army and this government in 11 days.” Unfortunately, 23 U.S. Embassy staffers, all Americans, signed the July 13, 2021 cable sent to Antony Blinken warning of rapid territorial gains by the Taliban and the subsequent collapse of Afghan security forces, and offered recommendations on ways to mitigate the crisis and speed up an evacuation.[18] At the same moment the White House was lashing out at the Taliban for violating their promise to allow safe passage for stranded Americans to the Kabul Airport,[19] according to NPR Milley was telling reporters "the Taliban are facilitating the safe passage to the airport for American citizens. That is U.S. passport holders."[20] Sasha Ingber, a reporter for Newsy, wrote on Twitter. “We’ve had Americans get beaten throughout the night. One of them, an American woman, was beaten ‘twice’ even though she was carrying a U.S. passport. Yesterday @PentagonPresSec said Americans are not being impeded as they travel to the Kabul airport, no Americans harmed. The Taliban agreed to let them evacuate,” she continued. “What I am hearing suggests otherwise. Americans have been injured and stopped from boarding planes.”[21]

Milley and Austin and admitted that several US aircraft flew out of the country during the 2021 Rape of Afghanistan. They think they were flown to Russian Federal Republics of Uzbekistan or Tajikistan, but they were not sure. Austin and Milley had no idea how many aircraft were taken.[22]

Michael Yon, a former Special Forces soldier and war correspondent was among the private citizens working with private networks and the military to rescue stranded Americans. Yon said, "We had them out there waving their passport screaming, 'I'm American.' People were turned away from the gate by our own Army." Yon emailed an Army major whose team had tried to coordinate the rescue before abandoning it. "You guys left American citizens at the gate of the Kabul airport. Three empty jets paid for by volunteers were waiting for them. You and I talked on the phone. I told you where they were. Gave you their passport images. And my email and phone number. And you left them behind. General Milley also knew. Great job saving yourselves. Probably get a lot of medals."[23][24]

To ameliorate the rage after the murder of 13 U.S. servicemen Biden went on national television and vowed revenge. In as tuff a talk as Biden could muster, Biden said, "We will not forgive. We will not forget. We will hunt you down and make you pay."[26] Within hours the executions began. Mainstream media reported a revenge killing for the alleged ISIS-K attack. The home of a family of 10, including 6 children, was struck in a drone strike.[27] CNN reported a brother of the one of those killed said that they weren’t ISIS but an “ordinary family....We are not ISIS or Daesh and this was a family home — where my brothers lived with their families."

A neighbor told the outlet, “All the neighbors tried to help and brought water to put out the fire and I saw that there were five or six people dead,” “The father of the family and another young boy and there were two children. They were dead. They were in pieces. There were [also] two wounded.”[28] Piers Morgan called out Biden’s “reckless abandonment” of Afghanistan after the drone strike killed 10 family members. “Horrific,” the former "Good Morning Britain" host tweeted to his millions of followers. “Yet more tragic casualties of President Biden’s woefully reckless abandonment of Afghanistan [and] the inevitable chaos [and] carnage that resulted from it.”

According to The New York Times, Biden killed Zemari Ahmadi, a long-time worker for Nutrition and Education International, a California-based aid group, and 9 other members of his family. On the morning of the atrocity, Ahmadi’s boss called him at 8:45 a.m and asked him to pick up his laptop; Mr. Ahmadi left at around 9 a.m. in a white Toyota Corolla belonging to his employer. This is when surveillance began; An MQ-9 Reaper drone tracked Ahmadi around Kabul, as he picked up breakfast and went to his office; Around 2:30pm, Ahmadi began filling canisters with water, to distribute them as aid; Mr. Ahmadi commuted home around 4pm; As he arrived home at 4:50pm, the U.S. drone fired a Hellfire missile at him, murdering him and his family members.

Shortly after the strike, U.S. military leaders insisted only ISIS combatants had been killed, and that a secondary explosion proved there were explosives in the vehicle. An on-the-ground investigation disproves any claims of a secondary explosion. Ahmadi’s relatives said 10 members of their family, including seven kids, were killed: Ahmadi and three of his children, Zamir, 20, Faisal, 16, and Farzad, 10; Mr. Ahmadi’s cousin Naser, 30; three of Romal’s children, Arwin, 7, Benyamin, 6, and Hayat, 2; and two 3-year-old girls, Malika and Somaya.[29]

When questioned about the drone strike, Milley lied about it,[30][31] then admitted the US was entering an intelligence sharing agreement to target ISIS-K with the Taliban.[32][33]

Deep State subversives openly talked about military intervention in politics and presidential succession in August 2020.[34] Defense One, which describes itself as "a portfolio brand of GovExec, whose market-leading services help contractors support government leaders and their missions," is in short one of numerous daily globalist newsletters for the administrative state and military-industrial complex. Thomas Crosbie of the Royal Danish Defence College’s Centre for Joint Operations wrote in Defense One:

After the staged insurrection by the FBI at the U.S. Capitol building on January 6, 2021,[37] Milley had the incentive "to act if and only if an authoritarian coup has already taken place" that Crosbie spoke of, and colluded with Democrat House Speaker Nancy Pelosi in the coup against President Trump. On January 8, 2021 Pelosi told House Democrats that she spoke with Milley to discuss President Trump and the nuclear codes.[38]

After becoming chairperson of the Joint Chiefs, Milley began implementing the revolutionary long march through the institutions advocated by Antonio Gramsci and Rudi Dutschke. President Donald Trump said of Milley, "Milley went to Congress and actually defended Critical Race Theory being shoved down the throats of our soldiers. This Marxist, racist propaganda has no place in our Military—I banned these programs, now Biden and the Pentagon have resumed them. As soon as possible Congress must defund this racist indoctrination. General Milley ought to resign, and be replaced with someone who is actually willing to defend our Military from the Leftist Radicals who hate our Country and Flag."[39]

Milley is notable for a rather obtuse statement in a Congressional hearing: "I want to understand white rage. And I'm white." 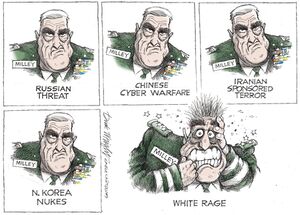 Milley said in a House Armed Services Committee hearing he is “widely read” in communist literature and, most notably, “I personally find it offensive that we are accusing the United States military general officers are commissioned [and] noncommissioned officers of being ‘woke,’ or something else because we’re studying some theories that are out there. I’ve read Karl Marx, I’ve read Lenin, that doesn’t make me a communist. I want to understand white rage. And I'm white." Author Lee Smith noted that Milley was not asking the right questions:

Helen Raleigh of The Federalist asks,