Below is information relating to Communism and cannibalism. 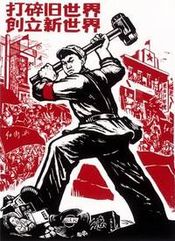 In 1955, Chinese communist leader Chou En-lai declared, "We Communists are atheists".[1] In 2015, the Communist Party of China reaffirmed that members of their party must be atheists.[2] See also: Atheism and cannibalism and Atheism and communism

Joseph Stalin, the Premier of the Soviet Union from 6 May 1941 to 5 March 1953, patronised the League of Militant Atheists, whose chief aim, under the leadership of Yemelyan Yaroslavsky, was to propagate militant atheism and eradicate religion.[6][7]

According to the University of Cambridge, historically, the "most notable spread of atheism was achieved through the success of the 1917 Russian Revolution, which brought the Marxist-Leninists to power."[8] See also: Atheism and communism