From Conservapedia
(Redirected from Riots during the Obama Administration)
Jump to: navigation, search

The Obama Riots were a series of racially motivated conflagrations that erupted nationwide in the last half of President Barack Obama's second term. Initially elected as America's first "post-racial" president,[1] many African-Americans became increasingly disillusioned as Obama's presidency progressed.[2] Critics charged Obama personally inflamed the rioters and lawless elements responsible for the destruction of property, businesses, and jobs in several American cities.[3][4]

Pat Caddell and Doug Schoen noted early on in the Wall Street Journal, "Rather than being a unifier, Mr. Obama has divided America on the basis of race, class and partisanship." Mary Frances Berry, former head of the U.S. Civil Rights Commission, acknowledged that the Obama administration attempted to polarize America around the issue of race as a way of diverting attention from an anemic recovery and other issues.[5] Caddell and Schoen further stated, "President Obama's divisive approach to governance has weakened us as a people and paralyzed our political culture."[6]

President Obama attempted to mitigate the fiasco his comments created about the integrity of law enforcement by inviting his personal friend and the arresting officer to a White House Beer Summit.

Asked about the incident at an evening prime time press conference televised to the nation, Obama attacked the police and proclaimed the arresting officer "acted stupidly."[8]

Shortly after Obama's display of disrespect for police in the legitimate performance of their duties, his poll numbers declined, particularly among groups who are the biggest victims of crime. The Pew Research Center noted "Some of the larger declines are among members of his own party."[9]

In March 2012 a white Hispanic shot and killed a 17 year old youth, Trayvon Martin, who violently assaulted him. A jury found Trayvon Martin's killer acted in self-defense.[10] Wikipedia reports, "media coverage surrounding Martin's death was greater than that of the 2012 presidential race, which was underway at the time."

According to the victim, an altercation began when Trayvon Martin suddenly appeared from behind and said, "You got a f----- problem, homie? You got a problem now", knocked him down and pounded his head on a concrete sidewalk.[11] The victim received a nose fracture, two black eyes, lacerations to the back of his head, a back injury, and facial bruising. When Trayvon Martin saw the gun, he reached for it saying, "You're going to die tonight m-----------!" President Obama later remarked, "Trayvon Martin could have been me."[12]

Liberal Law Professor Jonathon Turley noted, "I am equally troubled by Attorney General Eric Holder discussing the case in public speeches when his department is supposed to be conducting an unbiased review of the facts involving a man who has not been convicted of a crime....The impression, in my view, diminishes the appearance of due process and fair trial for the accused."[13]

After he was exonerated, the victim responded to the President's provocative comments: "I think that throughout the process the President should have done what he said he was going to do and not interject himself in a local law enforcement matter or a state matter and waited until the facts came out, instead of rushing to judgment, making racially charged comments, and pitting American against American. I believe that he should have taken the higher road given his position and, been an example, been a leader as the President should be and say, let's not rush to judgment."[14] 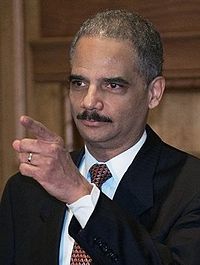 According to witnesses deemed credible by investigators, a Grand Jury, and even eventually the United States Department of Justice Civil Rights Division, 18 year old Michael Brown was shot 6 times and killed by Officer Darren Wilson of the Ferguson, MO Police Dept. after Brown assaulted the Officer with a punch to the face from a standing position through the police vehicle window, and attempted to wrest control of the Officer's firearm. Brown was the main suspect in a strong arm robbery that occurred moments earlier. Brown was unarmed, and his body lay in the street as Police conducted an investigation lasting several hours.

The White House sent 3 representatives to Brown's funeral[15] as violence and looting already occurred.[16] President Obama called the death of the 6'4", 292 lb. Brown, who smashed Officer Wilson's face while in a sitting position, "heartbreaking".[17] Eric Holder was dispatched to meet with Brown's family and begin a separate DOJ investigation before local authorities completed their own. As in the Louis Gates and Trayvon Martin cases, Obama and Holder began a series of public statements impugning the integrity of public servants who were lawfully fulfilling their duties.[18] Obama spoke of "a gulf of mistrust between local residents and law enforcement"[19] and Brown's family flew to Geneva, Switzerland to testify before the United Nations Committee Against Torture, alleging police violence against African-Americans was widespread and commonplace in the United States.[20]

When the Grand Jury failed to indict the Officer, more violence erupted. Months later, Holder's Justice Department, again, was forced to publicly admit there was no cause to consider the death of the black teenager as a civil rights violation or hate crime. When Holder's announcement came, more rioting erupted and two police officers were shot. President Obama reserved his reaction on the shooting of the two officers for a late night comedy show, Jimmy Kimmel Live![21]

Dollar costs of the Ferguson Riots by mid 2015 were still not available, that is, damage to private property and government riot control costs. The real cost is in the loss of future income which now will never materialize.[22]

The Ferguson Riots failed to muster African-American voters to the polls in the 2014 Midterm Elections to retake the U.S House of Representatives or keep the U.S. Senate from going Republican, as Democratic Party strategists (such as Donna Brazile) had hoped.[23][24][25] Yet in many ways the 2015 Baltimore Riots were a spinoff of the anger engendered in Ferguson. The New York Times reported President Obama met the day after the midterms with Ferguson protest leaders and expressed concern, in the words of Al Sharpton, that the movement and its objectives "stay on course".[26] Social media analysts discovered links between the Baltimore and Ferguson violence; between 20 and 50 social media accounts active in Baltimore were also used in Ferguson at the peak of violence in late Summer 2014, suggesting the presence of professional organizers.[27]

The number of the nation's police officers murdered in the line of duty doubled during President Obama's tenure.[28][29] Many were deliberately targeted.[30] [31]