A RINO (Republican in Name Only) is an officeholder or candidate who is a member of the Republican Party, but holds views to the political left of most Republican voters, or simply does whatever the liberal media wants. The term "RINO" describes politicians who claim to be Republican but are in fact liberal or puppets of the liberal media, and therefore generally debase the winning conservative coalition base of the Republican Party. Since elected GOP officials tend to be less conservative than the party base, a relatively large number of RINOs are entrenched members of the party organization. They also tend to resort to cronyism to fill key government positions, and often are career politicians. Some conservative commentators have also referred to them as RUNTs (Republican Under Nominal Terms),[1] while another, less frequently used term for them is a DIAN (Democrat in All but Name) because of their embracing of most of the Democrat Party's social and fiscal platforms while operating nominally as a Republican.[2] RINOs have been said to be "controlled opposition" to the Democrats - with the Democrats doing the controlling.[3]

RINOs are often Republican only to the extent it serves their own interests, and will abandon conservative principles as soon as it is in their own interests to do so. RINOs often provide support for raising taxes, abortion as a "right", homosexual "rights" and gun control. Some RINOs have connections with Planned Parenthood or corporations that support goals of population control; other RINOs pay lip service to pro-life values while in practice not advancing those values.

In recent Republican primaries, voters have been rejecting establishment RINOs in favor of those with stronger conservative principles. Their commitment to self and not party is evident in their refusal to endorse the candidate that beats them. In some instances, they refuse the will of the voters and their party by running for office on an independent ticket. It is important to vote for someone who's more conservative on the issues rather than for a Republican because anyone can join a party and be they can be RINOs. In Presidential primaries, however, RINOs are often heavily favored. In 2008 and 2012, RINOs John McCain and Mitt Romney were nominated, respectively and RINOs such as Chris Christie were considered for 2016.

Mitch McConnell, the Senate Majority Leader, is a RINO. 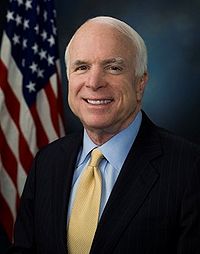 A majority of conservatives distrust RINO John McCain even though many of his policies are that of a true conservative. Key RINO principles rejected by McCain include support for gay rights, support for abortion, and support for earmarks. He has positioned his career as a bipartisan moderate, reaching across the aisle whenever possible. This is also his downfall. The era of reaching across the aisle passed—when statist, socialist Democrats became Senators. His major political blunders mostly came during the 21st century political period. He was against both the Reagan and Bush tax cuts, and employed class warfare rhetoric in trying to stop the tax cuts from taking effect. His support for amnesty was the complete opposite of what conservatives wanted. He has always complained about enhanced interrogation techniques, calling them "torture". In non-election years, he likes to trash conservative positions and icons in order to get the media's and Democrats' approval. However, during the election he refused to go after Barack Hussein Obama's associations with Jeremiah Wright. He believes in the junk science known as global warming, and has supported cap-and-trade programs. Another Middle East war, without a goal, without full commitment to win, without Congressional approval- McCain supports the President. It didn't stop there and in July 2011, he called the Tea Party, the people that care about fiscal sanity in Washington, they are "hobbits".[7]

The sacrifices he has made serving this country cannot be overlooked. John McCain has earned war hero status but also the status as a D.C. zero.