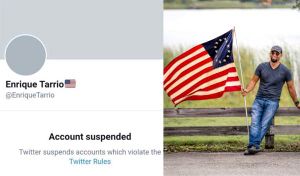 Microsoft and IBM are sometimes considered Big Tech firms because of their size, and Twitter not for its size but its societal impact. Twitter will likely be bought out by one of the larger firms at some point.

As of 2018, Google and Facebook controlled 60% of all digital advertising revenue, totaling over $60 billion.

Big Tech is playing a large role in the decline of patriotism as a value held by Americans.[3]

Big Tech, including Google[4] and Facebook,[5] engaged in censorship of conservatives and Christians.[6][7]

In August 2018, multiple social media giants, with the support of the Left, mainstream media and Democrats,[8] colluded to ban Alex Jones's InfoWars from their sites simply because of his political views.[9] In response to public criticism of the conspiring social media platforms' actions, leftists made dismissive excuses for those companies on social media and in the liberal media, claiming that they are "free to do what they want" because of their status as privately owned companies, not realizing that the collusion of those platforms to censor and ban InfoWars and other conservative companies and individuals for their political views potentially violate antitrust laws.[10] In February 2019, removed 22 pages related to Jones and InfoWars.[11]

Facebook banned several people whose views it opposed, labeling them "dangerous," even though they did not violate the site's terms[12] – Facebook continued allowing actual left-wing hate speech to go unpunished, however.[13] Additionally, Apple News banned LifeSiteNews from its platform for "intolerance."[14]

Facebook, YouTube, and Twitter are banking on developing artificial intelligence technology to help stop the spread of hateful speech on their networks. The idea is that complex algorithms that use natural language processing will flag racist or violent speech faster and better than human beings possibly can. Doing this effectively is more urgent than ever in light of recent mass shootings and violence linked to hate speech online. But two new studies show that AI trained to identify hate speech may actually end up amplifying racial bias. In one study, researchers found that leading AI models for processing hate speech were one-and-a-half times more likely to flag tweets as offensive or hateful when they were written by African Americans, and 2.2 times more likely to flag tweets written in African American English (which is commonly spoken by black people in the US).[17]

Some proposals to curb excesses of social media involve using anti-trust to break them up or for increasing regulation on the companies. These proposals are primarily offered by democrats[18] [19] [20] [21] and would benefit the deep state. There is some question as to if this approach would make censorship even worse.

An alternative approach is to alter or repeal CDA 230, which would dramatically increase the amount of litigation against these companies if they didn't put an end to these practices.[22][23] This approach is being pursued by several conservatives including Josh Hawley and Louie Gohmert.

Alphabet Inc. is the parent company of Google, which also owns YouTube, Android, The Groundwork and dozens of other companies. The Groundwork in 2015 boasted it could influence the vote in any democratic election anywhere in the world as much as 25%,[24] highlighting the Search engine manipulation effect.

In June 2019, Project Veritas released an undercover video in which a Google executive admitted that the company was working, through its policies and products, to prevent "the next Trump situation."[25] Google subsequently moved to censor the video from its platforms.[26]