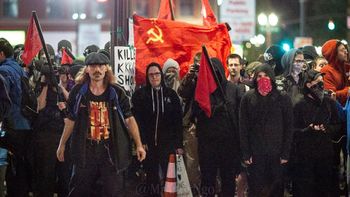 The DOJ has arrested over 100 anarchists for rioting and destruction of federal property. The DOJ has also charged four men in federal court for attempting to tear down the statue of Andrew Jackson in Lafayette Square. The FBI has over 200 open domestic terrorism investigations ongoing. AG Barr has created a task force on violent anti-government extremists led by the U.S. Attorney’s Office in New Jersey and the U.S. Attorney’s Office in Northern Texas.

With 200 Trump-appointed judges confirmed, the rule of law will be upheld. Democrats at all levels — federal, state, and local — have done nothing. Senate Democrats blocked bipartisan police reform. Minnesota’s Democrat governor failed to urgently deploy the National Guard — it took President Trump for that to eventually happen; his suggestion — and the ultimate descendance into chaos there in Minneapolis.

Three Democrat Minneapolis councilmembers voted to abolish the police, while they themselves were getting a private security detail. That’s quite rich.

Democrat mayor of Seattle called the CHOP zone — the autonomous zone — “the summer of love.” It is anything but that with one dead, multiple shootings, and desperate pleas for help unanswered by business owners and others.

President Trump stands against defunding our brave police officers, caving to mob rule, and cancel culture which seeks to erase our history.

Let’s be clear: The rampant destruction of statues is not a part of any ideology, but this anarchy is aided by failed Democrat leadership. And as President Trump has tweeted, these statues, quote, “are great works of art, but all represent our History & Heritage, both the good and the bad. It is important for us to understand and remember, even in turbulent and difficult times, and to learn from them.”[1] Note: Many of the violent actions in the pre-planned Marxist uprising across the United States beginning May 28, 2020 are too numerous to count and may not be recorded here.[2][3] Kansas City police officers found bricks and rocks staged near protest sites around the city, stoking concerns that individuals or groups had pre-planned looting and destruction that hit the city over the weekend, the department said Sunday. “We have learned of & discovered stashes of bricks and rocks in & around the Plaza and Westport to be used during a riot,” the department said in a tweet on Sunday.[26]

“There is no doubt. This was an organized effort last night,” she said. “There were clearly efforts to subvert the peaceful process and make it into something violent.”[34]

officers at about 12:16 a.m. found a container of gasoline, bricks and “materials used to assemble crude incendiary devices commonly known as a ‘Molotov cocktail’” inside a red Mitsubishi Outlander parked on Central Avenue, near the police department at 1301 First Ave. N, according to arrest reports.[35] It’s the Fourth of July, and revolution is in the air.

Only in America would it look like this: an elite-sponsored Maoist revolt, couched as a Black liberation movement whose canonical texts are a corporate consultant’s white guilt self-help manual, and a New York Times series rewriting history to explain an election they called wrong.

The people who run this country have run out of workable myths with which to distract the public, and in a moment of extreme crisis have chosen to stoke civil war and defame the rest of us – black and white – rather than admit to a generation of corruption, betrayal, and mismanagement. I saw the first hints of this crackup in the panicked conversations of campaign reporters four summers ago.

Colleagues in news media had always reveled in the power to police the boundaries of national politics.

Former ABC reporter Mark Halperin* (henceforth canceled people will be marked here with asterisks, for shorthand purposes) used to cheerfully refer to a handful of pollsters, pundits, and pols he called the “Gang of 500 who set the political agenda for the country.”

Like Russian aristocrats who spent the last days of the Tsarist empire flocking to fortune-tellers and mystics, upscale blue-staters have lost themselves lately in quasi-religious tracts like White Fragility, and are lining up to flog themselves for personal and historical sins.

In desperation to help the country atone for their idea of why Trump happened, they’ve engaged in a sort of moon landing of anti-intellectual endeavors, committing a generation of minds to finding a solution to the one thing no thinking person ever considered a problem, i.e. the Enlightenment ideas that led to the American Revolution.

The same pols and pundits who not long ago were waving the flag for wars and insisting that American-style democracy was so perfectly realized that it made sense to bring it to all the peoples of the world, by force if needed (think Friedman’s hypothesis of a borderless utopia of forced wealth creation called the Golden Straitjacket), have now reversed course to tell us our entire history needs to be wiped clean.

Bernell Tremmell was murdered by Marxists in Milwaukee in July 2020 for his outspoken beliefs in freedom, justice, and racial equality.[118] Lee Keltner (right) was murdered by a far left activist hired by NBC.[210]